The Fed, openly printing money out of thin air is theft of value, it’s literally a confidence game. Stock buy backs are only possible with free money from the banks. Imagine buying up your own product.

It’s obviously anarchy already for the affluent and their corporate model. Government without the pretense of purposeful, for and by the people governance is called force.

Here are the 5 markets, have at it while doing no harm or nothing changes. #Bitcoin #Blockchain #Silver #Gold 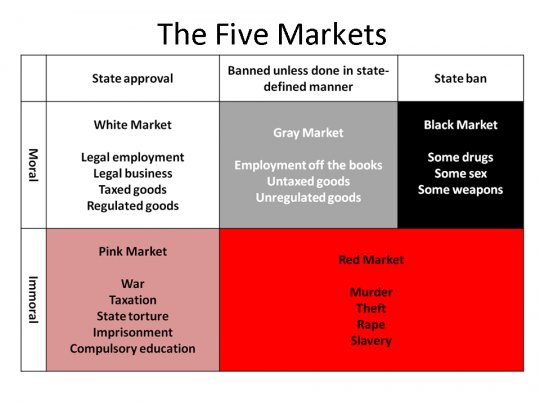 Agorism is a revolutionary political philosophy that advocates the goal of bringing about a society in which all relations between people are voluntary exchanges by means of counter-economics. Counter-economics is the sum of all non-aggressive human action which is forbidden by the state.

Put The Corrupted Middleman Out on His Ass

How Blockchain Technology Reduces Wall Street Risk & the Fallacy of Too Big To Fail!

“If the root of our economic problem is the tendency toward centralized, globalist bureaucracies (like the EU and the WTO and the IMF and the World Bank) why does anyone believe the solution will be centralized, globalist bureaucracies (like the BRICS Bank and the EEU and the AIIB)? Today we look at a truly paradigm-shattering civilization-wide change taking place right now that has the potential to undermine the status quo: the peer-to-peer economy.” corbittreport