Was California Named After A Black Queen?

Was California was named after, Queen Califia, a Black Amazon warrior Queen?   Spanish writer, Garci Rodríguez de Montalvo, wrote about Queen Califia in 1500 in his novel,Las sergas de Esplandián (The Adventures of Esplandián). Califia was said to rule an “island nation” where gold was the only metal. Whoopi Goldberg even depicted Queen Califia in the Disneyland Film, Golden Dreams.

A seven foot high panel of Califia with her Amazons at the Mark Hopkins Intercontinental Hotel in San Francisco was created for the opening of the hotel in 1926, by Maynard Dixon and Frank Von Sloun. Louise Lloyd created a depiction entitled The Naming of California, which can be seen in Sacramento in the Senate Rules Committee Hearing Chamber on the 4th floor of the State Building. More info Blackthen:

Does even the Myth of a Queen Califia Expose European tells of History, of Blacks in the Americas ?

The History of Queen Califia and the California Blacks

Ancient American Empire of Xi: Queen of Diamonds and Gold; Califia and the California Blacks

*In the continental United States of America, there were Africans who came before slavery, before Columbus, and thousands of years before Jesus Christ. In many cases, these Blacks and other indigenous nations established thriving civilizations in ancient America. Queen Califia and the California Blacks were one such ancient Black nation.

Reigning over the Empire of Xi, in the ancient kingdom of Utla, the nation of AtLan, was the great queen of gold and diamonds, ruler of the California Blacks. Queen Califia, decorated warrior general – mother, was the grand and beautiful royal leader in the beloved, wealthy, and powerful, Land of the Blacks:

A civilization with an abundance of natural resources: gold, diamonds, vast quantities of precious stones and metals, with territory spanning thousands and thousands of miles throughout California. From the coast of San Francisco to Bahia Mexico, as far inland as Colorado, Utah, and all the Pacific Ocean Island Nations including Hawaii, and Australia. Places where most of the original inhabitants were aborigine, black and brown people of color.

Queen Califia was a powerful General Queen, a strategic opponent, who commanded and maintained a fleet of ships while ushering in a time of peace in all surrounding lands.  Read further at eurweb:

One Ancestor a Day – Queen Calafia 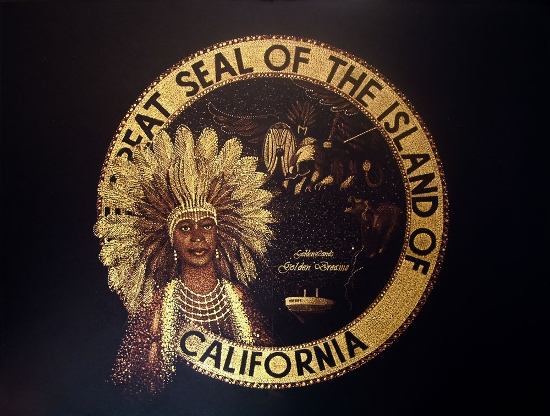 Although hundreds of thousands of ancient rock art and cave drawing exists in Crystal Lake California — dating back 50,000 years or more (a protected military base) — all up and down the California coast in Mexico, Utah, New Mexico and Colorado, among many other sites, official authorities continue to have no idea who created them. Although many discoveries over the last decade has indisputable proof and evidence of a great civilization of Blacks living in America for thousands of years.

The famous Olmec Heads in Mexico, countless art, sculptures, figurines and archeological discoveries. The fact that the academic community and mainstream media continue to ignore this head in the sand approach to discovery is suspect. They refuse to acknowledge or disclose the true creators of the indigenous, the great Black civilization that founded America and accomplished these great feats.

One technological breakthrough I accomplished by using a Mac computer in an effort to study and find the royal color of purple color pallets, symbols, pics and other related cave-rock art with similarities in order to identify the origins of vast amounts of ancient art in so many places. So we back engineering some of the photo graphic cave art. While the assumption is they were scientifically advance, their technology could possibly be compatible to our tech in the 21st century. And indeed it was. They were not only tech savvy but also 3D, CGI, Computer Generated Illustration savvy. The cave art remarkably demonstrates animation and reappearing art. To my discovery, ancient images did appear showing lifestyle, religious ceremonies, the gods, worship, activities, work, family and the wealth and opulence of the ancient Blacks of America. You will surely be as amazed as I was to see what the cave and rock art revealed.

Although the amazing digital graph photos, DPI’s are low, the color graphics are clear enough to see the life and times of the ancients and one thing is for sure. They were not hunter – gathers.

“The History of Queen Califia and the California Blacks” – Researched and written by Diane Blackmon Bailey – dblackmonceo@gmail.com

I implore you to Read further at eurweb:

4 thoughts on “Was California Named After Black Queen Califia?”