Mark Passio explains how Following Orders means doing what you are told to do, without judging for yourself whether or not the action you are being ordered to carry out is Right or Wrong. 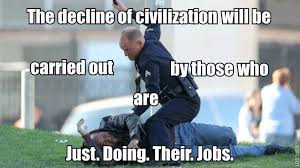 “I was just following orders” is NEVER a valid excuse or “justification” for immoral, criminal behavior, and this lame attempt to abdicate personal responsibility SHOULD NEVER BE ACCEPTED as a valid excuse for such behavior.

The term Justification comes from the Latin noun jus: “right; law” and the Latin verb facere: “to make; to create”.

Justification = To “Create” A Right.