“Again, were we to inquire by what law or authority you set up a claim [to our land], I answer, none! Your laws extend not into our country, nor ever did. You talk of the law of nature and the law of nations, and they are both against you.” —Corn Tassel (Cherokee, 1785) 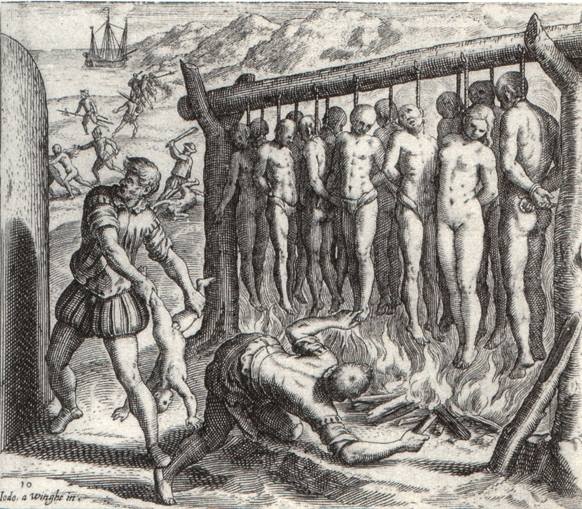 This past May, I went to the Archives of the Indies in Seville, Spain to see the original documents issued by Pope Alexander VI in 1493, and to see the original Requerimiento (‘the Requirement’) issued by the Spanish crown government in 1513, 500 years ago this year. The archives director was kind enough to let us see the two original papal bulls. (I traveled with Dr. Debra Harry (Paiute Nation) and attorney Sharon Venne (Cree Nation).

The Requerimiento was written to formally notify the original and free nations in places such as Panama and elsewhere in ‘the Americas’ that they were required by the right of the Bible, the Crown, and the Sword to hand themselves over to Christian domination in the form of the Catholic Church and the Spanish crown.

What do I mean by domination? Domination is arbitrary and unrestrained-control exerted by one person or group over another person or group, or exerted by one nation or people over another. Arbitrary means you get to make it up as you go, on the basis of “whim” or “fancy,” meaning “a fanciful idea.” Given that a whim is “a sudden desire or change of mind,” domination is accurately defined as a presumption of being required to obey the desires and ideas of others, until a habit of obedience is well established. The T-shirt slogan “Obey” is missing a conclusion: “Obey the Domination.”

This Papal Bull is a declaration of war

Around 235 A.D., the Roman Empire entered a phase of despotism that historians of the period term “the Dominate.” A couple of years ago a Latin scholar told me that the Dominate translates in English into “domination over everything.” Alternatively, it could be phrased “everyone and everything under domination.” Today, overwhelming evidence in the context of the U.S. (the Patriot Acts I and II, the Authorization of Use of Force, The National Defense Authorization Act, global and unrestrained NSA surveillance, billions spent on the militarization of the police, etc.) suggests that the American Empire has entered its own version of the Dominate, or what the U.S. military has termed its program of “Full Spectrum Dominance 2020” for the year of its scheduled completion.

A precursor of today’s dark period was manifested five hundred years ago by the Spanish crown in the abovementioned “El Requerimiento” (The Requirement). The document was based on a bizarre Catholic- Christian worldview that God had created such key persons as Adam (along with Eve, as an afterthought), as well as St. Peter, who became the first in a long line of popes. Later, Pope Alexander VI generously donated to the Catholic sovereigns, King Ferdinand and Queen Isabella, and had awarded them domination over all non-Christian Indian lands “discovered and to be discovered.”

As a result of this belief, the Christian God’s providence, and the pope’s immense generosity, required the Indians, those “discovered and to be discovered,” to obey what theologian Luis Rivera, in his book A Violent Evangelism (1992), calls “the Spanish domination.” Thus, El Requermiento was a “requirement” arbitrarily imposed on free nations and peoples to ‘Obey the Domination’ of ‘the State,’ through the directives of the Spanish Empire and Emperor (Charles V). The result was a bloody genocide being committed against originally free and independent nations and peoples, and millions were killed, and millions more forced under domination.

Today, the phrase ‘the State’ is shorthand for ‘the State of Domination,’ which everyone, including ‘Indigenous peoples’ (peoples under a presumption of dominance) are now considered required to obey. In ‘The Dominate’ of the American Empire, its agents deem the Patriot Acts, I and II, the Authorization of Use of Force, The National Defense Authorization Act, and so forth, to be Los Requerimentos (The Requirements) of our time.

We are told that those documents require our obedience and subjection to the American Government, the supposed “representatives” of “the American people.” It is the most updated version of a model of domination that is thousands of years old, only this time it is being done with a technological sophistication and capability that those empires of the ancient past could not even dream of. All this is what the Dark Lord Dick Cheney termed “the new normal.”

Nonetheless, we, as the originally free and independent nations and peoples of this hemisphere—‘the Americas’—still have the spiritual and ceremonially capacity to remember our original free existence. This is our permanent status quo ante (fallback position). Our original free existence renders void any and all claims of any rightful or legitimate domination over us in the name of “conquest,” but it will not invoke itself. We have to explicitly invoke it.

From the viewpoint of our originally free political identity and law systems, their supposed “requirements” based on their arbitrary ideas, desires, and whims are null and void. The boarding schools and other psychological operation centers used against us and our ancestors during their childhoods were efforts to de-spiritualize us, but the fact that this column is being written demonstrates that those efforts failed.

Our original free existence (B.C., Before Colonization) is the source of our right of self-determination, which makes us forever rightfully free of any claim that we must obey their claim to a right of domination over us. Our full right of self-determination entails the right to freely choose our political status as Nations and Peoples, which includes the right to live our lives on the basis of our sacred birthright, entirely free from any and all manifestations of their wrongful and illegitimate systems of domination.

Steven Newcomb (Shawnee, Lenape) is co-founder and co-director of the Indigenous Law Institute, author of Pagans in the Promised Land: Decoding the Doctrine of Christian Discovery (Fulcrum, 2008).

Pope apologizes for crimes against indigenous peoples; while Doctrine of Discovery continues to Ravage the Globe

On his first papal visit to his native Latin America, Pope Francis issued an historic apology to the native peoples of the Americas for sins committed by the Catholic Church during the conquest of the continents.

At a social justice summit in Bolivia, at which many indigenous groups and the country’s first-ever indigenous president Evo Morales were in attendance, the first-ever Latin American pope “humbly” asked for forgiveness.

In his speech, Francis said that many Latin American Catholic leaders have previously addressed the “grave sins committed against the native peoples of America in the name of God”.

He also recalled that, during a visit to the Dominican Republic in 1992, Pope John Paul II had apologised for the “pain and suffering” over the hundreds of years since the Church arrived at American shores.

He said: “I humbly ask forgiveness, not only for the offences of the church herself, but also for crimes committed against the native peoples during the so-called conquest of America.”